Pigtail Food Flipper – The Best Tool For Steaks and Ribs

It’s getting to be barbecue time again, and I have to say, I did our first barbecuing yesterday, and it was awesome. I made four racks of ribs and a bunch of chicken—boy, it was good.

Now that were getting into grilling season, I want to talk about an unassuming, interesting little tool called a pigtail. You can buy them individually or in a set of two, and I can tell you that, though I have the set of two, I really only use the small one. I don’t think I’ve ever used the big one. A pigtail is used when turning over or flipping meat. 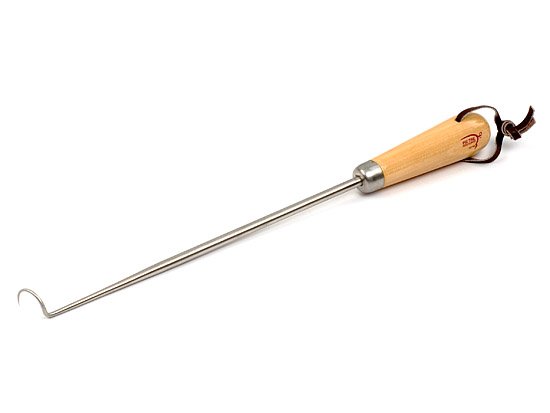 This is one of those tools that my wife would say shows my compulsion to take things a little too far. Because when you’re grilling a piece of meat, you don’t want to poke holes in it—it makes the juices run out. The less holes, the better. A big barbecue fork could have two tines (so that’s two holes) or it could have four tines (so that’s four holes). The pigtail has one point and makes only one hole. But in addition to that, the way it’s curved allows you to–pretty much in one motion–bring your hand down, go into the meat, give your wrist a half turn, and it’s almost locked on to the pigtail.

I’ve used this for all different kinds of steaks, chicken breasts and racks of ribs, though I would suggest using tongs for turning smaller pieces of chicken. But tongs just don’t work very well on a big steak. And if it’s fish, I would always use a spatula.

This is another example of a very simple product that does what it’s advertised to do, and does it well. It’s inexpensive and will last you a lifetime. Check it out.