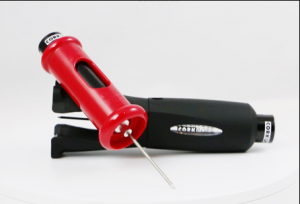 So tell me if this has happened to you: You’re going out to celebrate something. You figure it’s a special night, so you bring along a good wine you’ve been saving for awhile to the restaurant. You tell the waiter, and he brings over a corkscrew to open it. He screws it in, and pulls out…half the cork. Next thing you know, he’s apologizing, the bottle’s being passed around as different servers try to dig out the rest of the cork, and the manager is come over to see what’s happening. Not what you had in mind for your celebratory dinner.

To avoid moments like that, I got a Cork Pop. All you do is push a needle through the cork. Then you press the button that pushes a little bit of CO2 into the bottle, and that pops the cork out like a bottle of champagne.

That’s all it is: push, press, pop. It takes all of three seconds.

There’s two different kinds to choose from: the original and the Legacy. The original’s on Amazon for around $16. The Legacy is $2.50 more, but it includes a sturdier body and a built-in foil cutter, so that’s worth the money in my book. And the cartridge of CO2—which also comes in $8 two-packs for later refilling–will open about 60 bottles of wine.

Now, believe me, I use mine plenty. I always bring it out when I take my wine out. The waiters all think it’s the coolest thing and bring their buddies over to see it. And I want to say that it has no issues, because operation-wise, there are none.

Example: last week my wife and I decided to go out for a steak dinner. We brought a nice 12-year-old bottle of California Cabernet. The waitress said she’d have no problem opening it; we told her it’s old, so you need to make sure you go all the way in with the corkscrew. Well, she did as we asked, and it looked like it was going to be a beautiful opening…but it wasn’t.

The problem wasn’t due to anything the waitress did or didn’t do. The problem was the cork was longer than the corkscrew. So she went in as far as she could, but was only into the cork about 75%. And that’s exactly where it broke. We were left with a perfect 75% of the cork on the corkscrew and 25% left in the bottle. At that point, nothing was going to save it–not our Cork Pop and not an Ah So. We had no choice: we had to push that part of the cork into the bottle and then decant the bottle. I should have known better: older wine, Cork Pop. No exceptions.

So the fault doesn’t always lie with the person who’s using the corkscrew.

At the end of the day, the Cork Pop is the best method I’ve found to open wine. If you, too, want to avoid digging the cork out of that special bottle, I’d say get one today.