Kitchen
This one is great–I’m really excited to tell you all about this: it’s the Butterball XXL Electric Turkey Fryer.

Here’s how this all came about... For years, at every family holiday, we’d have the family over to the house, and I’d make a turkey. And I’d rotisserie that turkey on the barbecue. No complaints--the turkeys always came out really good; but it was extremely time-consuming. I think my wife kind of liked the turkey cooked that way, just because it got me out of the house for four or more hours. But it took even longer than that. 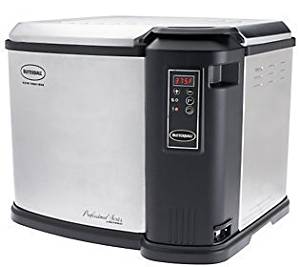 For instance, one thing I learned is a trick about how to keep the turkey breasts really moist. What I did is, after taking the turkey out of the refrigerator to let it warm up a bit, I put ice packs on the breasts. This, obviously, would keep them colder than the rest of the turkey; the theory was that when you cooked the bird, the breasts would stay cooler longer, hence stay moister. The next step was to truss the bird onto the spit. I got good at that, but it also took a good 20 minutes.
So, I started telling my wife that we should get a turkey fryer. She kept saying, “Your turkeys are great; why do you want a turkey fryer?” Translation: “I don’t want a turkey fryer; where are we going to put it?” Well, a month or two before Thanksgiving 2015, I saw one and ordered it: the Butterball XXL Electric Turkey Fryer! (Cue dramatic music.) I knew my wife wasn’t going to be happy when it arrived, but I had a couple of weeks to think about that. About a week after I ordered it—when she was in a good mood–I told her that I knew she might get mad, but I could tell her what I had bought then, or she could wait to see it when it got here. So I spilled the beans that I had bought a turkey fryer. Of course, she went on a little rant: “Where can we put it? Why do we need it? I can’t believe you bought it…”
And then the turkey fryer arrived. Not knowing what to expect from a turkey fryer, that year I figured I’d make two turkeys: one on the rotisserie, as I’ve been doing, and one in the new Butterball XXL turkey fryer. They were a little different, but both were excellent turkeys. That was the consensus among our guests.

And I have to say that after that first turkey, my wife was sold on it. It was so much quicker, and so much easier… and I didn’t have to be outside for 4+ hours. In November.

Now for the details: it takes 30 to 60 minutes to get the oil to come to temperature, but once that happens, it’s a straightforward four minutes per pound. We did a 22-pound bird last Thanksgiving in 88 minutes! And there’s almost nothing I had to do. I do season the outside of the bird; it adds a little bit more flavor and color, looks more appealing when it comes out. And I also do some sort of injection: I’ve used the Butterball injectables, but I think the Tony Zatarains are better, because they already come with the injector. Once I’ve done that, I get the oil up to temperature, and just slowly lower the turkey in. I multiply the weight in pounds by four, and set the timer. And forget it…I come back when the timer goes off to take the turkey out of the oil. It has a nice basket with a handle for the turkey to sit in.

You can also use that basket to fry five pounds of chicken wings, which we want to try in the near future.You can also use this fryer as a steamer. Fill it up with water, add some sausage, corn, shrimp and crab, and have yourself a crab boil. It’s a much more useful machine than most people give it credit for. And there’s nothing like fried turkey.

So a few things you may want to know: